A Wagnerian Summer in Bayreuth 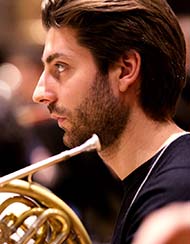 To play Wagner at the Bayreuth Festival is the crowning glory for a horn player who has studied in Germany. In the horn room at the Festspielhaus, a large board hangs on the wall where the names of all the horn players who have played in the festival orchestra since 1876 are written. Standing in front of this board and reading the names of these renowned hornists, it quickly becomes clear what an honor it is and what a responsibility it brings with it to be given the opportunity to continue this musical tradition.

The festival lasts ten weeks for us horn players, from the end of June until the end of August; usually over 18 horn players perform there. Four of these play the Wagner tuba exclusively, a rarity among opera houses. One member of the group is elected to play the famous Siegfried Call. This year, Carsten Duffin, solo horn in the Bavarian Radio Orchestra, gave his debut as Blower of the Call. Gerd Seifert still holds the record with 157 Siegfried Call performances.

The style of playing is quite special in the Bayreuth orchestra pit. The pit is almost completely closed off, and the horn players sit in the back row, completely covered by the stage. Therefore all nuances have to be exaggerated: simply put, everything has to be up a level in volume. “Piano” means “mezzo forte” etc. The stopped passages and other effects have to be played as loudly as possible, especially by the low horn players, so that the audience can hear them. This always reminds me of the important exercises that Prof. Marie-Luise Neunecker showed me: every day, practicing five minutes of lip trills and five minutes of stopped notes in the low range are essential in developing and maintaining these abilities.

To get through a 5-hour opera four times in a week, ten weeks long, means that you have to play primarily on your air stream. This is how you develop sound and endurance. This way of playing is very active and healthy, and you feel the positive effects over the course of the whole regular season.

Viewed from a technical perspective, the secret is this: don’t let yourself be taken over by the thrill of the music in the first few days. You have to trust your own technique and especially cannot allow yourself to force anything. It’s happened that I ask myself after two weeks if I will ever be able to play softly again. This is why it is also important to warm up in the soft dynamic range. After this 2-week period of getting used to the situation, you feel nearly invincible!

The perfect combination of professionalism and a friendly atmosphere is what impressed me the most about the Bayreuth horn group. Everyone is obsessed with the music of Richard Wagner, and they give everything in order to ensure an optimal performance. For example, before every act of every opera, the horn players have a rehearsal on their own to make sure that the changing personnel are able to play their best together.

Outside of the pit, the atmosphere between us is friendly and familiar. When you have 18 horn players, there’s always the possibility to do an activity together, be it tennis or football (soccer), leisure time with family on the lake, or the legendary grill parties on free days.

The common denominator is the love for Wagner’s music, the dedication, and the ability to relax together in the right moment in order to ensure that you can always go into a performance refreshed. Everyone is adopted and accepted by the more experienced colleagues, as he or she is - a powerful experience, especially for a young horn player.

Many musicians cannot understand why someone would “sacrifice” ten weeks for Bayreuth. After you have had this experience, though, bringing yourself personally and musically to a whole new level, it’s not hard to figure out why some horn players have already spent over 30 summers in Bayreuth.

Kerry Turner, Quartet #3 (all 4 hornists in the video also play currently in Bayreuth)