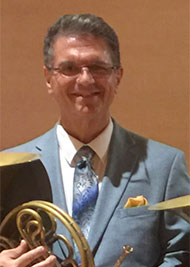 It is 11:56 pm as I begin typing. I cannot remember the last time I hit the pillow before 1am and I’m enjoying every second of it. I am Marc Lumley and many people call me the founder of Horns United. Not so much, as we start each show I explain that this is a group effort, and without divine inspiration, we could not have done it. Done what? Established a fledgling multi-national charitable organization that showcases the finest hornists on the planet in masterclasses with students ranging from beginners to aspiring pros, all to raise money to donate to charities and hospitals that are providing Covid-19 relief. We hornists come from a hunting tradition and I, frankly, was tired of being the hunted. So what was I told to do?

That’s the shortest history I can give you. So what, you wonder, do we do to achieve our philanthropic goals? We charge a small fee for our Master Series classes that meet most Thursdays and Saturdays. Simple really. We set out to provide some fun time for hornists who are all locked down. We did the normal but in an abnormal venue, the cell phone. By now we all have experienced the joy of teaching via Skype, FaceTime or Zoom. Yes it is limited and, at times, very frustrating but without it right now, where would we be? Standing outside students homes listening to their lessons through an open window? No thank you. So we made a decision, embrace the situation and concentrate and improve upon what we COULD do and ignore what we couldn’t do. This has become amazingly successful for us. Claude, our microphone and ‘net expert has been figuring out how to get water out of a rock by using combinations of settings that go well beyond what have been tried previously. This was because he was expanding on what he could achieve. It’s working! I also think that the audience is listening more intently. The aforementioned Claude is one of the most critical listeners I know and even he is starting to be somewhat satisfied with what we’re getting.

Also we are telling the artists, “Innovate, do something you’ve always wanted to in a masterclass, we are here to do our best to deliver your package.” If we have to be so limited then, by God, let’s have as much fun as we can! Besides being his wonderful self, Erik Ralske was ready for Q&A with charts and demos and all sorts of engaging things that sent the program a little over 30 minutes long! Everyone stayed too because it got juicy! That’s what we want. Defeating the limitations by maximizing our strengths. We also tell everyone, “We want the audience to not think of you as the person in formal wear 250 feet away concentrating like mad… but rather, be like them. Kerry Turner and Kristina Mascher-Turner performed in flip flops and bare feet! Michael Gast did this triple tongue arpeggiated part of his warm up at light speed and then give them that grin of his and the looks were all jaws on the ground. Priceless! But everyone is walking away having learned a tremendous amount and having fun in the process. Our audience varies from middle school beginners to seasoned pros, and they keep coming back for more.

Now we have Cor Camp. We/I am obsessing over it and want it to be a huge success. We are expanding our template to a blocked out schedule running from 8:30am US central to 4:30 pm US central. We exist solely to raise money for charity so we suggest a donation of $145.00. With that you not only have the opportunity to learn from the very best but you get to see Bill Caballero zoom in driving his convertible or eat popcorn while listening to a round table with Eldon Matlick or listen to the greatest names in the business tell you they get nervous too and then give strategies to help get past them. But the two most important things your $145.00 does are save lives and develop a vaccine.

Yes, I know there are places doing this for free this summer and I applaud them for their generosity. But WE want to stop this horrible virus, how else are we going to get back into full concert halls or football stadiums? We won’t even be able to rehearse properly! And forget opera and broadway, with the projection of singers? They’ll all be in hazmat suits! No! The future of our craft, our love, is dependent on everyone doing their part to rid the world of covid 19. Playing your horn or washing cars, what does it matter. People do carwash fundraisers all the time. We play horn.

To close we are presenting the hopeful, exuberant finale from Gustav Mahler’s Symphony #1 with our “Mahler 1 Heard Round The World” event. We will have all musicians interested playing it as hard as they can. Horn, harpsichord, it makes no difference as long as we bring joy. We will need organizers to get permissions to go into parks, city hall steps and deploy with proper social distances. The venue doesn’t matter with a group of hornists.

Finally, we are looking to the future. We fund infectious disease research and will continue to do so because this isn’t the last one. We want to help with preparations. So we are looking at making our organization grow and expand our skill set. But that’s a surprise and a subject for another article. Meantime, we are doing our Cor Camp fundraiser starting June 8th. Details are at www.horns-united.com. Please consider helping or joining us. And remember,

God bless you all,
Marc Lumley

Marc Lumley is Principal Horn of The Symphony of the Hills in Kerrville, Texas and Co-Principal Horn of The Mozart Festival, Texas. He is a retired band director, and former Air Force Band member. Marc is a very active private teacher and, as his students say, his “Cult of Lumley” has enjoyed great success. His studio has produced multiple Texas All State players for 26 consecutive years. Marc studied with legendary Texas horn instructor, Leland Sharrock in High School. He attended the University of Texas where he studied the great Wayne Barrington. Winning his Air Force position moved him to Los Angles where he had the privilege of studying with James Decker and Richard Todd. After realizing he wanted more of a family life he left full time playing to become a music educator. Returning to college at The University of Texas a San Antonio he studied with Beth and David Mairs and ultimately with Bruce Gifford. He enjoys running with his wife Monica, running after his grandson Atlas and running to see his sons, Claude and wife Julie, and Hayden and wife Brandi.