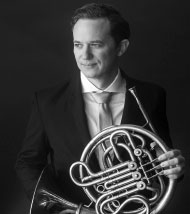 National Symphony Orchestra hornist Robert Rearden has released his first solo recording, Idyll, available digitally on all streaming services as well as on CD. Rearden is joined on the album by friend and frequent collaborator Teddy Abrams, who not only accompanies Rearden but who composed a new piece for the project as well.

Rearden: In the great symphonic and operatic works of Brahms, Mahler, Strauss, and Tchaikovsky, some of the most beautiful passages are written for the horn. However, the solo horn repertoire by these great masters is limited to the concerti and a few incidental pieces by Strauss in addition to the trio by Brahms. It is my hope that this compilation—featuring other works by these composers, as well as a piece by violinist and composer Fritz Kreisler, and works by two of the most important artists of our time, hornist and composer Félix Dervaux and conductor, pianist, clarinetist, and composer Teddy Abrams—will highlight welcome additions to the horn’s lyrical repertoire.

The horn parts from the works of Kreisler, Mahler, and Brahms are played from the original scores. However, Yuriy Leonovich and Nathaniel Hepler have expertly created transcriptions of the works of Strauss and Tchaikovsky, respectively.

I have enjoyed a long friendship and history of collaborations in many settings with Teddy Abrams who composed Out of the Woods? especially for this album. Abrams writes, “The work is a surrealist fantasia, moving between romantic-style melodies and impressionistic haze. The work conjures both a fairytale magical quality and a feeling of the maze-like uncertainty of our own very real times.”

I chose Kreisler’s Tempo di Menuetto (originally for violin), Mahler’s Ich bin der Welt abhanden gekommen (originally for baritone), and Tchaikovsky’s Andante Cantabile (originally for cello) because they sit well on the horn and highlight the instrument’s rich sound—and because these three pieces have been on my list of “things I want to play” for some time.

Written while Félix Dervaux was a student and intended to be part of a compendium of new works for young horn players, Idyll proved too difficult to be included and was filed away. Dervaux says, “I composed the piece over two days while my girlfriend (now wife) Sophie was out of town; the piece is reflective of my mood at the time—peaceful and happily longing for her return.” 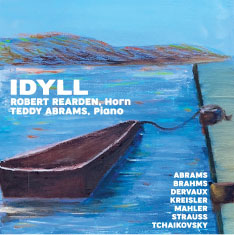 Brahms finished his Cello Sonata no. 1 in 1865, the same year in which he completed his Horn Trio, and the two pieces received their premieres within one month of each other. Although Brahms specified on the original manuscript of the Trio that it could be played by a cello instead of the horn, the limitations of the horn of the time would not have allowed a similar alternate instrumentation for the Cello Sonata, but the modern horn certainly makes this possible. As befitting a cello sonata but unidiomatic to horn repertoire, rests are few and far between, and the piece spans the entire range of the instrument—a real tour de force!

The cover art on the album is from an oil painting by my late grandmother Evelyn Wells.

The recording is dedicated to the memory of my producer and friend Thomas C. Moore, who died in October 2021 from an aggressive brain tumor.

Idyll is now available on CD and on all streaming platforms with links here: https://robertrearden.hearnow.com

Robert Rearden joined the National Symphony Orchestra in 2016 after having served as principal horn of the Florida Orchestra for six years and the New World Symphony for four. He has appeared regularly with the Cleveland Orchestra and as guest principal for the Saint Paul Chamber Orchestra. Rearden received his undergraduate degree at the University of South Carolina, his master’s degree and Artist Diploma at The Cleveland Institute of Music, and he was a fellow at both the Tanglewood and Aspen Music festivals. Rearden has performed with the Mainly Mozart, Britt, Artosphere, Steamboat Springs, Spoleto USA, and Eastern music festivals. He can be heard performing on recordings by the National Symphony Orchestra, the Cleveland Orchestra, and the Florida Orchestra. 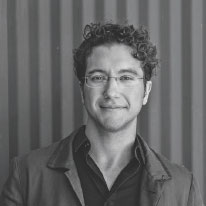 A versatile musician, Teddy Abrams is the widely acclaimed music director of the Louisville Orchestra. Here, he has led the world premieres of his own piano concerto as well as of numerous interdisciplinary projects, including his rap-opera, The Greatest: Muhammed Ali. In recognition of his groundbreaking work, Abrams was named Musical America’s Conductor of the Year for 2022. In addition, Abrams serves as music director and conductor of the Britt Festival Orchestra, and he has guest-conducted many of the country’s most prominent orchestras, including the Los Angeles Philharmonic, the Chicago, San Francisco, National, Houston, and Milwaukee symphonies. He has also served as conducting fellow and assistant conductor of the New World Symphony.