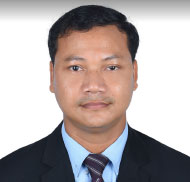 Hello, my name is Vichet Khuon, and I am from Cambodia. I was born in 1980 to a large and happy Buddhist family; I have three brothers and two sisters. At that time, Cambodia was still involved in the civil war with the Khmer Rouge. Soon after my birth, my mother accidently consumed poison that caused her many difficulties. She was not able to talk or even dress herself, so my father decided to take her to one of the hospitals in Thailand. He had to sell our house and most of our possessions to afford this, but we went to Thailand together in 1981. When we arrived at the border, we learned that we could not get to the intended hospital; so instead, we went to a refugee camp and found a hospital there that was eventually able to cure my mother. We lived in the camp for about ten years.

In 1991, we were finally able to return to Phnom Penh; but in 1994, my family decided to send me to live with my uncle because we did not have enough food for us all. I became his house cleaner, car washer, cook—his servant, even though I was his nephew and only a boy. At age 15, he did enroll me in a Fine Arts school. There, I met a teacher named Naomi Sharp from England. She taught me how to play horn, and her Christian faith was a positive and powerful influence on me as well.

When my uncle learned that I had become a Christian, he would not allow me to live with him anymore, so I had to move to the school. From that point, my life became more difficult; I had no food, no room, no possessions of my own, but I tried hard to learn horn. Ms. Sharp continued to teach me, but she also gave me food each day. At first, I felt like I didn’t know anything about music…what is music? why music? I thought that the sounds of guns and mines that I had heard daily during the war and the sounds of the refugee camp were my music; but with the horn, everything changed for me—the beautiful sound which came through the horn comforted me and brought me hope for life.

In 2000, Ms. Sharp said she would return to England. In Cambodia, there was no horn teacher, so she recommended that I go to Vietnam for a bachelor’s degree in horn. While in Vietnam, I joined the Vietnamese International Orchestra. After two years there, I completed my degree, came back to Cambodia, and became a member of the Royal Orchestra which performs for our king.

In 2007, I married the most beautiful girl, Leakhena, the other half of my life story. We now have two sons, Andrew and Timothy. In 2008, I went to Bangkok to study at the Asian Baptist Theological Seminary for two years, but I have not been able to finish yet because of my family responsibilities.

Cambodia is poor in music, and, besides myself, very few people play the horn. I want to teach students to play, but we don't have instruments for them to use—our cost of living makes them very expensive—and the Fine Arts school does not focus on developing musicians for such things, so I play only for special events.

Leakhena and I have opened our home to students who come from rural areas to study at the University in Phnom Penh. I encourage them to study well, and we try to provide them some funds to help cover their school fees. Most of them are from the poorest families, and they often consider dropping out of school because of this. So, we take them in and help them. I teach them every Friday night: English, Bible, music, and life skills. (I want to teach some of them horn too!) Still, it is not easy for them, as it was not easy for me. Yet we love them and want to see Cambodian children and youth enjoy health, faith, hope, and success.

Thank you for taking the time to read our story.

With respect and gratitude,
Vichet Khuon