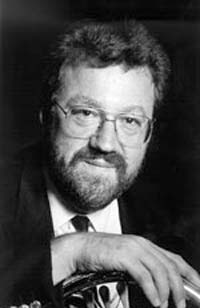 Chris Larkin is Chairman of the British Horn Society, has special interest in historical brass instruments and period horn playing, and is also a conductor.

Chris was born in Wigan in Northwestern England and started playing in his school's brass band. He studied at the Northern School of Music with Peter Rider and Julian Baker and at the Royal Academy with James Brown. He has been a member since 1973, and Director since 1982, of the London Gabrieli Brass Ensemble, and has a passion for unearthing and publishing original music for brass. He has been a member of the BBC Symphony Orchestra since 1979 and has conducted many brass and wind programs for various radio stations around the world.

Chris has researched and recorded CDs of French music for organ and brass, 19th-century brass music and 20th-century American music (including music of Charles Ives) for the Hyperion label. For the 1996 BBC Ives Festival, he created an open-air re-enactment of a George Ives brass band collision in London’s Leadenhall Market. He has an encyclopedic knowledge of the history of brass instruments and often gives lecture-demonstrations, entitled Around the Horn, on horns through the ages. His most recent recording for Hyperion, Antique Brasses, was made entirely on period brass instruments.

Chris was elected an Honorary Member in 2014 at the IHS Symposium in London, where he performed on trompes-de-chasse and the Vienna horn.