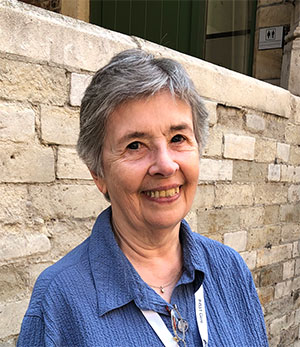 Elaine received her Bachelor of Music Education degree at the University of Buffalo where she studied horn with Lowell Shaw, and her Master’s degree in Music Education at the University of Western Ontario (London), where she also taught horn and conducted the Horn Ensemble. While in London, she played in Western’s Faculty Chamber Orchestra, sang in the Gerald Fagan Singers, and played harp in Western’s New Music Ensemble. She also taught at the Western Conservatory of Music and was principal horn in the Fanshawe Orchestra.

While still living in Canada she worked for the Buffalo Philharmonic, first in Operations/Education then as Assistant Librarian. She also conducted the Fort Erie Legion Band and the Fort Erie Chorale, and sang in the Buffalo Philharmonic Chorus and Chamber Chorus. Then she became General Manager of the Maryland Symphony in Hagerstown, where she played in the Hagerstown Concert Band, sang in the Hagerstown Chorale, and conducted the New Horizons Band of Hagerstown. She moved to Erie PA to be General Manager of the Erie Philharmonic, and Conductor/Music Director of the Erie Philharmonic Chorus. She also played in the Edinburgh Concert Band and a horn eEnsemble in Westfield NY.

Elaine currently lives in Nashville, Tennessee, where she plays in the Nashville Community Concert Band, sings in the Vanderbilt Community Chorus, and teaches at Croft Middle School – in addition to her continuing responsibilities with the IHS.