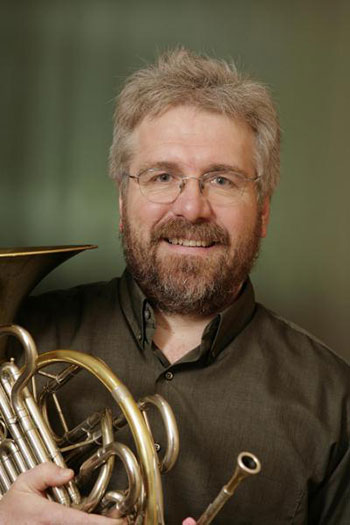 Jeffrey Snedeker epitomizes service to the horn community and the IHS. He has served on the Advisory Council (2003-2010, 2016-2021), including terms as president (2006-2010, 2016-2018), edited The Horn Call (1998-2003), edited Music Reviews (2003-2016), curated the 2020 Virtual Workshop, and is editor of the anniversary book on the history of the IHS, published in 2021. On a regional level, Jeff has been on the music faculty of Central Washing University in Ellensburg since 1991, co-founded the Northwest Horn Society, hosted the Northwest Horn Workshop several times and supported other hosts, and is engaged with regional performing ensembles, educational institutions, and community outreach.

Jeff holds a BA from Heidelberg College (1980), MM in performance from the University of Michigan (1981), MA in music history from Ohio State University (1985), and a DMA from the University of Wisconsin Madison (1991). He has published more than 50 articles, including entries in the New Grove Dictionary, and has released five solo CDs with music for natural horn and horn in jazz.

Jeff won First Place in the Natural Horn Division of the 1991 American Horn Competition and is principal horn with the Yakima Symphony. He is a member of the CWU Faculty Wind Quintet and the CWU Faculty Brass Quintet, and directs the CWU Brass Choir and CWU Horn Ensemble. He has played with many orchestras regionally and around the country, and on film and video game scores. He gives concerto performances, traditional and natural horn recitals, and jazz gigs across the US and around the world.

Jeff serves on the Board of Directors of the Historic Brass Society and the Washington Music Educators Association Advisory Board. Honors include the 2006 CWU Faculty Member of the Year, 2008 CWU Phi Kappa Phi Scholar of the Year, 2012 WMEA Higher Education Music Educator of the Year, CWU Distinguished University Faculty for Service, 2014 Washington State Representative Timm Ormsby Faculty Citizenship Award, the 2014 National Phi Kappa Phi Artist Award, and in 2018, induction into the WMEA Hall of Fame.

Jeff was awarded the Service Medal of Honor in 2020.