The International Horn Society (IHS) was formed in June 1970 at the Second International Horn Workshop in Tallahassee, Florida, USA. We are an organization dedicated to performance, teaching, composition, research, and the preservation and promotion of the horn as a musical instrument. 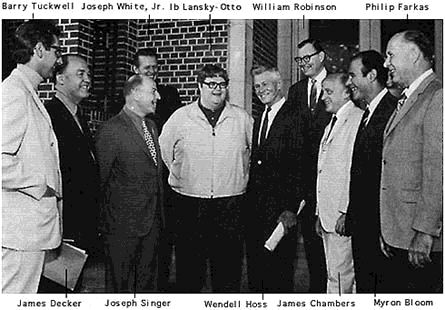 Some of the founding members in 1970
It was during the second symposium that the idea was suggested for an international organization of horn players. An organizing committee later declared the IHS "founded" and elected the first officers of the IHS: Barry Tuckwell, President; Wendell Hoss, Vice-President; Norman Schweikert, Secretary-Treasurer. Harold Meek was later appointed as the first editor of The Horn Call.

The IHS has over 3500 members from 55 countries around the globe, including internationally renowned touring artists, symphony musicians, university teachers, students, horn designers/builders, composers, music libraries, music publishers, and amateur players of all ages and walks of life. The society has something to offer every horn player and enthusiast.

Our aims and goals

The purpose of this society shall be to promote musical education with particular reference to the horn. In pursuit of its aims and purposes, the Society and its members:

The International Horn Society recommends that HORN be recognized as the correct name for our instrument in the English language. [From the Minutes of the First General Meeting, June 15, 1971, Tallahassee, Florida USA]