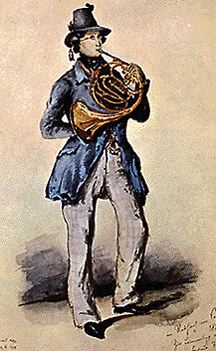 Born in Parkenstein, Bavaria, Franz Strauss had begun his musical career by the age of 7, playing the violin at a wedding dance. After musical study with his uncles Johann Georg Walter and Franz Michael Walter, in which he learned to play the clarinet, guitar, and all brass instruments, Franz Strauss at the age of 15 entered the service of Duke Maximilian of Bavaria as a guitarist. His study on the horn continued, and it was the horn that would become his major instrument. In 1847 he joined the Bavarian court orchestra, a position he held until his retirement in 1889. Franz Strauss also served as a professor at the Academy of Music in Munich from 1871 until 1896 and served from 1875 until 1896 as the conductor of the amateur orchestra "Wilde Gung'l."

Franz Strauss married Elise Seiff, the daughter of a regimental band director, in 1851. While this was a very productive period for him as a composer and performer, it was a tragic period of his life; a 10-month-old son died of tuberculosis, and then cholera took the lives of his wife and young daughter, leaving him a widower at the age of thirty-two. Strauss did not remarry until 1863, at which time he married Josephine Pschorr, a daughter of the wealthy brewer Georg Pschorr. To this union two children would be born, and the elder, Richard Strauss (1864-1949), was destined to become a great composer.

Comments made about Franz Strauss by musical figures of the period reveal both the esteem in which he was held as a performer and something of his character as a man. A musical conservative, Franz Strauss nevertheless performed in the premiere performances of several important operas of Richard Wagner in Munich, including Tristan und Isolde (1865), Die Meistersinger (1868), Das Rheingold (1869), and Die Walküre (1870). The conductor of the first two of these premieres, Hans von Bülow (1830-1894), called Franz Strauss "the Joachim of the horn," and also commented, "The fellow is intolerable, but when he blows his horn you can't be angry with him." Wagner mirrored Bülow's comments, and is quoted as saying, "Strauss is an unbearable, curmudgeonly fellow, but when he plays his horn one can say nothing, for it is so beautiful." Franz Strauss had artistic differences with both of these figures, which make the compliments they paid to him as a performer all the more meaningful. A story recalled by Richard Strauss relates that "Wagner once went past the horn player, who was sitting in his place in moody silence, and said, 'Always gloomy, these horn players,' whereupon my father replied 'We have good reason to be.'" Another story relates a difficult situation between Franz Strauss and Bülow. As the grueling dress rehearsal wore on at 4:00 in the afternoon for the premiere of Die Meistersinger, a rehearsal that had started at 9:00 and which followed 26 other rehearsals for this premiere, all performed without an assistant horn, Franz Strauss could take it no longer. As Ernest Newman relates the story,

Strauss said bluntly that he could play no more. "Then take your pension!" said the irritated Bülow. Strauss picked up his horn, went to the Intendant, and asked for his pension "at the orders of Herr von Bülow." As he was indispensable, [Intendant Karl von] Perfall had to use all his diplomacy to smooth the trouble out.

Beyond his very significant performing career, Franz Strauss also left a legacy as a teacher. Something of his method of teaching is known, as recalled by Franz Strauss's last student Hermann Tuckermann.

The method of Franz Strauss is first of all to emphasize tone quality. He always said: "Only by sustaining tones and by interval studies can you achieve a noble tone." Therefore each lesson began with tonal exercises. With his students he worked through the horn concertos, and the important parts from opera and concert literature. He never accepted a fee for his lessons. His main interest was to impart his experience and skill to hornists.

This concern for tone must certainly have been a significant element of his success on the horn and is certainly reflected in his solo works as well.

For more information, see THE HORN CALL
Vol. XXIX, no. 2