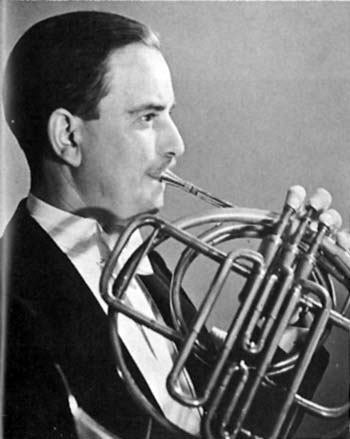 Aubrey’s first instrument was the violin, but he soon switched to horn. He studied horn with his father, violin with Adela Sutcliffe and Eugene Mieir, and in 1911 entered the Royal College of Music to study horn  with Friedrich Adolph Borsdorf. He played in the North London Orchestral Society during his College years and was appointed principal horn of the New Symphony Orchestra in 1911. He went on the London Symphony Orchestra's tour of the US under Arthur Nikish in 1912; his father was unable to go on the tour because of his contract with Covent Garden. After returning from the tour, Aubrey joined his father and brother in a memorial concert for the Titanic.

Aubrey became principal horn of Sir Thomas Beecham's opera company orchestra in 1913. It was during a tour with this company that he met Marion Beeley, a contralto for whom Sir Edward Elgar wrote "Hail, Immortal Ind!" in his opera The Crown of India. They were married in 1914.

Aubrey’s early career was shadowed by the success of his older brother, Alfred, who dominated the scene until he left for the United States in 1922, and of his teacher, Borsdorf, until Borsdorf was forced to resign because of anti-German feeling at the outbreak of World War I in 1914.

Both Aubrey and Alfred joined the armed services in 1914. Unlike Alfred, Aubrey saw no action, but played horn in the band of the Welsh Guards until 1920.

Aubrey was appointed first horn of the Royal Philharmonic Society in 1922 and co-principal of the London Symphony (with Thomas Busby) in 1923. He succeeded his teacher Borsdorf in 1923 as professor of horn at the Royal Academy of Music (Borsdorf had taught at both the College and the Academy), where his son Dennis was one of his students. His other son, Leonard, was an oboist.

In his teaching, Aubrey followed Oscar Franz's treatise Grosse theoretisch-praktische Waldhorn-Schule (1880). He demonstrated technique, phrasing, concertos, etc. in lessons. His breath control was legendary. He fought to preserve the "English" style of horn playing, preferring the lighter sound of the French horns to the "German" sound that was gaining popularity. He played a Raoux hand horn made by Labbaye c. 1865, to which English-made valves had been added. He would never permit the use of large-bore German horns in the BBC Symphony even while Beecham insisted on German horns for the London Philharmonic (and paid for them himself). Aubrey had perfect pitch and almost infallible accuracy, so he was successful on the narrow-bore instrument where others had difficulties.

Dame Ethel Smyth wrote her Concerto for Violin, Horn and Orchestra with Aubrey Brain in mind. He and Jelly d'Arányi premiered the work under Sir Henry Wood in 1927, and he played it in Berlin with Marjorie Hayward. York Bowen dedicated his Horn Sonata to Aubrey. Aubrey was often a soloist, and made a number of recordings; his recording of the Mozart K417 was the first horn concerto ever recorded. He played second horn to his son on a few occasions.

After his death, the Aubrey Brain Memorial Trust was established to promote a wind scholarship. The Dennis Brain Wind Ensemble played a memorial concert on their tenth anniversary in 1956 to raise funds for the trust.