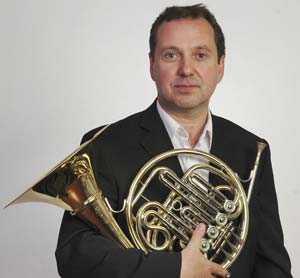 Michael Thompson has had a varied career – principal horn in major British orchestras, an international soloist, professor of horn, and conductor.

Mike was born in 1954. He studied at the Royal Academy of Music, and was appointed principal horn with the BBC Scottish Symphony Orchestra at age 18. At age 21, he became principal horn in the Philharmonia, leaving after 10 years to concentrate on his solo and chamber music career.

Numerous solos, premieres, recordings, movie sound tracks, work with Sir Peter Maxwell Davies, the Michael Nyman Band, and Sir Paul McCartney (Stately Horn), conductor of the Ulster Youth Orchestra and City of Rochester Symphony Orchestra, and Fellow and Aubrey Brain Professor of Horn at the Royal Academy indicate the breadth and depth of his accomplishments. He has been especially acclaimed for his inspiring leadership and work with young musicians. As a member of the London Sinfonietta, he has given many first performances, including the UK premieres of Ligeti's Hamburg Concerto and Richard Ayres's Noncerto.

Recordings include solo repertoire, on period instruments, and with his wind quintet and horn quartet. Numerous soundtracks as a studio musician include Harry Potter, Lord of the Rings, and Bond films. He plays a Paxman horn.

Mike was honored with the Punto Award at the IHS symposium in London, where he conducted several concerts.