Interview with Ranya Nashat of the Iraqi National Symphony Orchestra 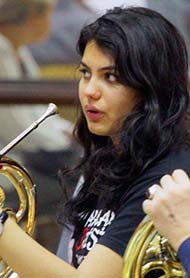 Kristina Mascher-Turner: How did you first discover the horn and decide you wanted to play it? How old were you when you began playing?

Ranya Nashat: I discovered the French horn when I was 9 years old at the music and ballet school in Baghdad, where I was a student. The school policy was that they chose what students play. My teacher showed up and introduced me to his shiny French horn - I was mesmerized by the color. My parents were against what they called a “boy's instrument.” They wanted piano or violin or flute, but I was so determined to play the shiny new thing whose name I couldn't spell. The first time I saw an orchestra (Iraqi National Symphony Orchestra ) was in 2005. I saw and recognized my teacher playing. When I got out of the concert, I said to myself, this where I belong.

KMT: How common is it in Iraq for women to play the horn, and for women to make a career of music in general?

RN: It is not very normal for women to play horn in Iraq - I had only heard of one other before I started to play with the orchestra. Now it is only me, so that is why when I started teaching at the music and ballet school I wanted to teach girls more than boys haha! Trying to start my army of French horn girls. Yes, it is okay for women to make a career out of music, but it's challenging. We have 10 female musicians now in the INSO.

KMT: Can you tell us a little about the Iraqi National Symphony Orchestra? How old is it, and how did it get started?

RN: The INSO is the Arab world’s oldest orchestra. It was founded in the late 1940's by a group of musicians from the Institute of Fine Arts.

KMT: Do you only play Western classical music, or are you also involved in any other genres, such as traditional folk music or popular music?

KMT: Which other horn players/recordings have influenced you? 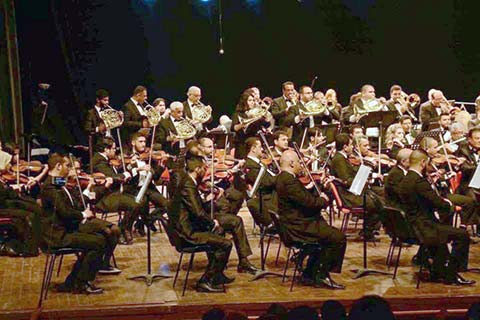 RN: I usually listen to the horns of the Berlin Philharmonic – Sarah Willis and Stefan Dohr, but mainly I hear everything YouTube offers. I just put it on and listen when I'm studying or doing house chores or just relaxing.

KMT: These past years have been incredibly difficult for your country and for Baghdad in particular. How do you keep your peace of mind in the midst of conflict and uncertainty?

RN: This is hard to describe. I have escaped death so many times but each one haunts me.... Every time a bomb goes off, I have problems living the days afterwards for at least a month. I thought as I grew up it would get easier, but it doesn't because I think of my loved ones. I do turn to music sometimes, but after the last bombing took place in Karda, I couldn't listen to anything that could comfort me. And I was sad about that! Because I was always sure that music is and always will be a big part of who I am. But now I'm back to listing to music and playing with the orchestra.

KMT: How has your orchestra been affected by recent events?

RN: Of course the orchestra is affected. I remember a rehearsal was canceled because a bomb went off near the place where we rehearse, and 2 of the musicians were hurt by glass shattering. We as players are affected by everything that goes on. In the summer now we play in a very small hall with poor air-conditioning, and it is 50 degrees Celsius (120 F.) It is very hot, and because of all the things that Iraq is going through, no one cares about how we rehearse.

KMT: Congratulations on recently becoming a mother! Has this changed your approach to music making?

RN: Becoming a mom is, I have to say, an overwhelming experience, but it has made me more determined to play music specially. When I turn on YouTube or the TV and Mahler's 1st or 2nd symphony or Bruckner or Mozart or Beethoven or anything classical comes on, my daughter listens to the whole piece without crying or anything other than concentrating on the music. She is 6 months old now, and so far she has attended 2 concerts of the INSO.