Teaching the horn in 2019 “The Art of Playing with Others” 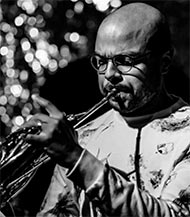 Greetings fellow horn enthusiasts! I’d like to thank the IHS for the opportunity to contribute my two cents.

When I was in high school in Atlanta, my first teacher, Richard Deane, used to end all of our lessons with duets. It was my favorite part of the lesson, playing with an all-star hornist and trying to mimic everything he did. I even had one of his homemade bell rests (and this was 1997!). In turn, I would play duets with my friends at school and in youth orchestra. I’ve since always loved playing duets, and I find the habit invaluable. I often travel with some sort of a duet book. It’s a great way to get to know your peers and have a good time, not to mention a great way to stay in shape. It also embodies the essence of most of what we do as musicians: listening, reacting and adjusting. You inevitably get inside the headspace of your partner, and it becomes a transcendent connection. I almost always feel closer to people after having had a duet hang.

After 15 years of freelancing in NYC, I’ve spent a lot of time considering what it is that gets you hired back to the gig. Once you get past the nonstarters like being a semi-agreeable person who can generally operate a French horn, there are other details and characteristics that come into play. In one form or another, I’ve recently found myself answering the following question a lot in masterclasses and mentoring settings:

“To what do you attribute your freelancing success?”

To which I reply:

“I think I know how to play with people.”

Now this sounds so basic that it usually flies over the students’ heads, and I’ve recently started doubling down and repeating it. Horn is hard. It’s easy to get preoccupied with just playing well, and that can get in the way of making the necessary spontaneous adjustments required to be a responsible section mate. I didn’t start off playing first horn at most of my gigs, and I don’t know many people who did. But I know for a fact that the reason I got called back to projects (and called for new ones) was because whoever was playing lead knew they could count on me as a protagonist. Freelancers have to adjust to a new set of conditions basically everyday (multiple times a day, even), and over time you start to learn what works for each environment. This means adjusting to every aspect. From details like fitting into the group’s sound concept and style, to overarching extramusical concepts like purpose and mood. Playing with ICE is different than playing with Orpheus for more reasons than just repertoire. You have to be of a flexible mind in order to listen, react and adjust.

Honing this skill can be the difference between working and not working (or getting tenure), yet somehow it’s not high on the list of things that are talked about in music schools and conservatories. “Am I marketable? What are the skills that will make others want to play with me and perhaps recommend me to their other colleagues??” These are questions worth asking yourself. And, even though “marketability” may not be such an attractive word when talking to musical artists, I think it’s an important and undervalued part of making a career in music. In my new role as Assistant Professor of Horn at the Lamont School, I see it as my responsibility to make sure my students are desired and hired not just because they can get around the horn, but because they will be seen as value added to whatever situation they might enter.

DAVID BYRD-MARROW is the solo hornist of the International Contemporary Ensemble (ICE). Working with a uniquely wide range of performers, he has premiered works by Matthias Pintscher, Arthur Kampela, George Lewis, Tyshawn Sorey, Anna Thorvaldsdottir, Du Yun, Marcos Balter, Wang Lu, Kate Soper, Miguel Zenón, and Chick Corea. Described as a “stunning and assured” (The New York Times) musician, he frequently performs at festivals including the Ojai Music Festival, Bay Chamber Concerts, the Mostly Mozart Festival, and the Tanglewood Music Center. He is on faculty at The Lamont School of Music at The University of Denver.