Horn Playing in the Time of the Pandemic 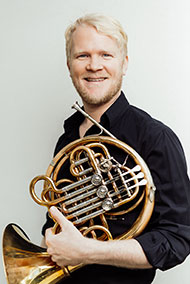 I had just gotten started on a tour of six concerts in southern Germany with my quartet, German Hornsound, in early March, when a wave of cancellations hit all public events and led rather quickly to a complete lockdown. The reason for this was, of course, the mutation of the already recognized SARS-CoV-2 virus, probably triggered in China, known as the Coronavirus. The problem is that the virus and the illness it causes, Covid-19, can be extremely serious (even to the point of causing death), particularly among those in high-risk health groups. Even though the WHO along with virologists around the globe are searching for treatments, vaccines, and especially information about the disease, a total social lockdown was unavoidable in the eyes of national and local governments. The protection of life must take priority over all other concerns. In the first few weeks of lockdown, a global feeling of solidarity was palpable. The hashtag #stayhome was everywhere and was our reality. At least in Germany and in many European countries, the numbers of infection and the mortality rate have fallen to the point that a loosening of restrictions is possible; life has started to regain some elements of normality. There are many heated discussions about how sensible it is to continue such a long lockdown, especially from an economic standpoint.

Culture, and music specifically, were the sectors hit first and will be those affected for the longest time to come. The music profession is dependent upon audiences (ideally with sold-out venues), upon applause, upon the response and reactions to live performance. Only in this manner is it fun to play and perform. Obviously, the music world has found a way to present music in the time of Corona. Thousands of split-screen videos are all over social media. Home concerts are being live-streamed. We’ve noticed very quickly that this is amusing for a while, but it is in no way a real substitute for our own music-making, especially playing music with other musicians.

Even now, when the first relaxing of restrictions in public life are coming into effect, one condition remains with us as long as we are without a viable treatment or vaccine: keeping a distance of 1.5 meters apart and wearing protective covering over the nose and mouth. So how can we translate this into our sector? It’s only possible to keep social distance in the audience if every third or fourth seat is sold. This is unprofitable for organizers and unsatisfactory for us as performing artists. The next question: How is this possible on stage with an orchestra or other ensemble? Remaining 1.5 meters apart and playing with a mask on? It’s the proximity and immediacy of the musicians that makes the magic possible. And masks on wind players? Absurd! Then we keep hearing about how wind instruments are virus spreaders, that blowing air through the instruments presents a high risk of infection and that the musicians should keep a distance of up to 12 meters.

To put a stop to all these rumors and speculation, various orchestras, music physicians, and institutes collaborated on a series of studies to debunk these theories and to come up with a road map to get orchestras back on track. My orchestra, the Bamberg Symphony Orchestra (Bamberger Symphoniker), cosponsored one of these studies. They performed qualitative experiments to visualize the flow of air combined with quantitative measurements of air velocity at different distances, to determine if playing a wind instrument really does cause a dangerous cloud of droplets or aerosols where the air escapes from the instrument. A fog machine with a very narrow nozzle released a constant spray of white vapor around the instrument. 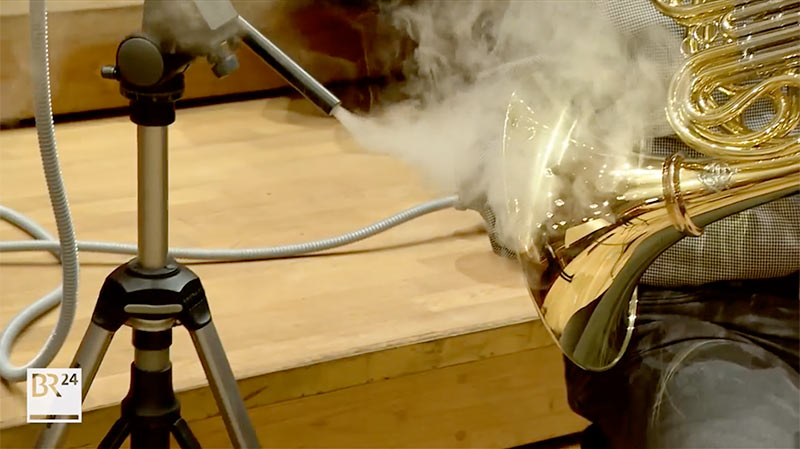 Additionally, air speedometers placed 1 meter, 1.5 meters, and 2 meters away from the instrument were meant to show if and at what velocity the air moves perceptibly. 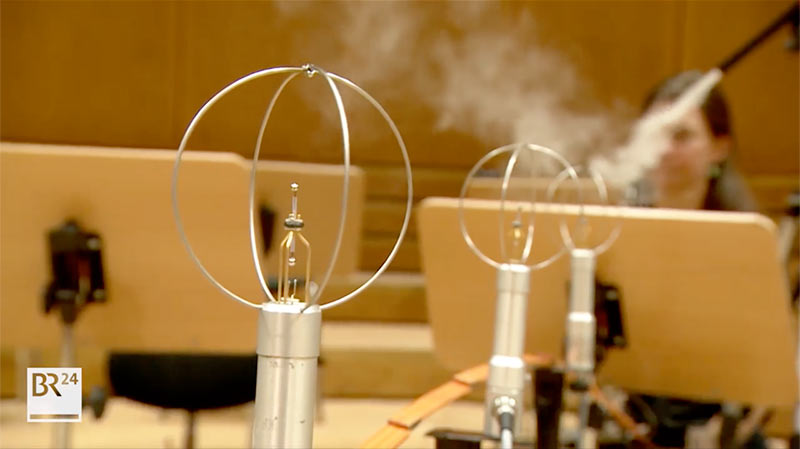 The results of these measurements were clear. In the case of nearly all the instruments, the air barely moved at all at the points where it exited the instrument. On top of this, even at a 1-meter distance, there was no perceptible movement of air. The only exception to this was the flute. The flute player blows air over and past the mouthpiece and, as a consequence, droplets and air displacement were minimally noticeable up to a distance of 1.5 meters. At 2 meters away, no change in the air movement was perceptible.

With the horn, as with brass instruments in general, the results of the study had a logical explanation. Obviously, we have a very high speed of air going into the tightest part of the system, namely the bottom of the mouthpiece cup. After that, however, the air has such a long way to travel as it moves through the conical tubing up to the bell. At a distance of anything over 10 cm, there was no more air speed to measure. Only the sound expands, not the air. This study indicates that a distance of more than 2 meters is unnecessary, even with wind players, to prevent the spreading of aerosols through playing.

The more important question seems to be this: how contaminated could the condensed water be that we brass players produce in the metal tubing and need to empty out? Other institutions have carried out studies about this. The Institute for Music Medicine in Freiburg collaborated with the Freiburg University Clinic and produced the results of their study entitled “Risk Assessment of a Corona infection in the Music Branch.” Their recommendations currently serve as the basis for the resumption of performance and teaching. You can see this 34-page document for yourself here (in German).

Where do we go from here? Since mid-May, we’ve seen more and more easing of restrictions, and life in public has begun to return to normal. Restaurants, bars, and cafes are open for business. Schools, kindergartens and crèches have started up again. And in the music world, concepts and plans of action to allow us to make music together started to take shape. The major obstacle continues to be that a maximum of only 50 people may congregate indoors. Given these restrictions, a regular concert hall could never be filled. This will continue to be the case until a medical treatment and a vaccine are found. Musicians are worried about how our branch will survive the crisis, and we can only hope that new formats and creative concepts will develop and continue to do so in the post-Corona era.

On a personal level, I have gone through various phases and states of mind. The life of a professional musician is determined by numerous concerts as well as travel. When one has family at home, it’s often complicated to divide the time and priorities between being on the road frequently for concerts and finding time for the family. This crisis solved the dilemma for me, and I suddenly had much more time for my children and my wife. That was wonderful, and it allowed me to see many things from a new perspective. I’d like to hang on to this feeling even after the crisis has passed, and perhaps to say no to the occasional concert that causes undue stress on my schedule or creates difficulties for my family. Because neither my wife nor I have jobs that are considered essential at the moment, we didn’t have to, weren’t able to, and weren’t allowed to work. This means that we have had time to take care of the children, 24/7. This comes with its own kind of stress, and sometimes it’s necessary to get some distance.

We were lucky, though, because we could alternate childcare tasks and only have one school-aged child at the moment that needed home schooling. At the beginning, I watched a lot of those split-screen videos on all possible channels and made two categories of horn players in my mind. Some must have more time than ever to practice and will come out of the crisis more fit than ever. The others – and I count myself among them – have small children, don’t get around to practicing, and need rehearsals to get into shape.

After some time had passed and after many talks with friends and colleagues, I came to one conclusion: it is extremely difficult to stay motivated and to practice without a real goal. Everyone misses playing with others, whether it is in a professional orchestra, in an ensemble, at lessons, or as an amateur. With my quartet, German Hornsound, we used the time to write several new arrangements. We also developed a new series called “Fantasies for Horn Solo,” in which we adapted pieces from the orchestral repertoire and came up with arrangements for one horn, giving people something interesting to practice during the Corona period. The first two volumes featuring Bruckner’s last 3 symphonies as well as Mahler’s Wunderhorn-Lieder are available from our GHS Edition (www.koebl.de). In the middle of May, we were able to meet up again for the first time in 10 weeks, rehearsed together, and gave a small livestream open-air concert. On top of that, we’ve organized summer Corona concerts together with a few festivals, allowing for and abiding by the hygienic and social distancing regulations. At least through these activities, we have a few concerts on the calendar that we can prepare for and look forward to playing. My orchestra is also planning on starting up again in the middle of June. We are putting on a large conducting competition, the Mahler Competition, at which we are rehearsing and performing Mahler’s 4th symphony (!) with 2 meters’ distance between musicians. I’m looking forward to the coming period, though at the same time I’m very worried about the performing arts. How will they go on? It will be different than before, in any case!

Aside from his activities as solo horn of the Bamberg Symphony Orchestra, Christoph Eß has won several prizes in international competitions. He studied with Prof. Christian Lampert in Basel and Stuttgart and graduated with honors in June, 2008. The ARD Music Competition (2005), Prague Spring Competition (2007), the Richard-Strauss Competition, as well as the “Concorso per Corno di Sannicandro di Bari” have all awarded him prizes, among others. As a soloist, he has appeared with several leading orchestras in Germany, Switzerland, Austria, and Czechia. He is also a founding member of the horn quartet, “German Horn Sound.”