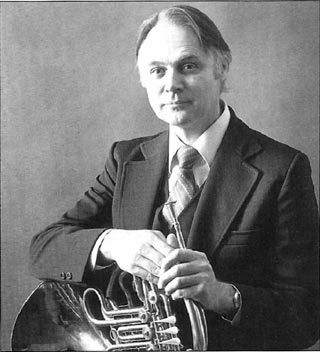 Eugene Rittich played a remarkable 37 years in the Toronto Symphony (1952-1989), taught many fine students, and developed the Rittich mute, the prototype of the mute used by most horn players today. Fergus McWilliam, a former student and second horn in the Berlin Philharmonic, said, "As far as I am aware, there exists no other personality who has had as much influence on Canadian horn players as Eugene Rittich."

Eugene was born in Calgary, Alberta in 1928 to Hungarian parents. The following year, the family moved to Kelowna, a small farming community in British Columbia. His father had studied cello and was able to put together a string quartet. "The first classical music I think I ever heard was a string quartet. We didn't have a radio and there was no exposure to live music in those days, especially in a rural community and in the 30s." A member of the quartet persuaded the town to purchase band instruments, and Eugene chose an alto horn because, with only three keys, it looked easier than the other choices.

The family moved to Victoria BC in 1941, and Eugene studied with Douglas Kent, who switched him to horn. "Douglas Kent was my first horn teacher. He was probably the seminal influence in my musical career." In 1946, Eugene began studies at Victoria College, but academic life looked difficult, and when Kent suggested he audition for Curtis, Eugene decided to try a career in music.

Eugene traveled to Philadelphia in the fall of 1947 and auditioned for Mason Jones, who had just returned from his war service. Eugene was accepted and began his studies immediately. He noted, "Jones was a brilliant player, and I think I probably learned most by hearing him play. He was very meticulous about basic things."

On graduation in 1951, Eugene's ambition was to get a position in one of the major American orchestras, but he realized that if he won such a position, he would be drafted into the US Army. He decided to go to Toronto because it was the closest Canadian city and it was a music center. He joined the Musicians' Union and after the required three-month wait started playing for the Canadian Broadcasting Corporation (CBC). In the spring of 1952, the first horn of the Toronto Symphony left; Eugene auditioned and got the job.

The Toronto Symphony and CBC Symphony shared a number of personnel and so had compatible schedules. It was through the CBC that Eugene had the opportunity to work with composer Igor Stravinsky. "The CBC Symphony was well-known through its broadcasts for doing a lot of contemporary music and for being a virtuoso reading orchestra. Stravinsky was interested in recording all his music and so a deal was reached…. Robert Kraft would lead the rehearsals and then Stravinsky would conduct the concerts…. He had a magic touch."

Eugene also studied privately with Philip Farkas (1967), Frantisek Solc (1971), and Arnold Jacobs (1973). Farkas used the bell throat size of Eugene's Kruspe horn as the prototype for the Holton H179 model. Eugene traveled to Brno, Czechoslovakia to study with Solc and learn about the Bohemian style of playing, "because our tradition of horn playing comes from there."

Eugene commissioned John Weinzweig's Divertimento No. 7 for horn and strings and Oskar Morawetz's Sonata for Horn and Piano and premiered both works on CBC radio in 1980, the divertimento with the CBC Vancouver Chamber Orchestra and the sonata with Patricia Parr. A number of other works were dedicated to him.

In addition to teaching and conducting at the University of Toronto (from 1962), Eugene worked for many years with students in the Toronto Symphony Youth Orchestra and, in the summers, with the National Youth Orchestra of Canada (founded in 1960). His students have been prize-winners in Prague, Munich, CBC, and Toulon competitions, play in orchestras throughout Canada, in the US, and around the world, and are now themselves horn teachers and music educators.

Eugene developed the Rittich mute beginning in the early 1960s because he couldn't find a good mute. "The only ones were commercial models which had no low register so I started to experiment. I tried a plain cone, which was simple to put together. Surprisingly it worked very well. I started to make and improve them, changing the materials and proportions I used." The Rittich mute is used all over the world and has often been copied.

Eugene is unique in having been named a Punto recipient twice – in 1988 at the Potsdam NY symposium and in 1998 at the Banff, Canada symposium. Tributes to Eugene appear in the November 1998 and October 2006 issues of The Horn Call, and profile in the April 1990 issue.