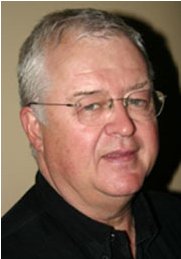 Sean Kierman and his wife, Pamela, have been driving forces in professional music and music education in South Africa. They are active in the South African Horn Society (SAHS), as founders and currently as sponsors and members of the Board of Directors, and they, along with other members of the society, were responsible for organizing the International Horn Symposium in Cape Town in 2006. Dr. Paul Loeb van Zuilenburg refers to Sean as the father of university concert bands in South Africa.

Sean was born in Portland OR and educated in China, Pakistan, India, and the US as the son of a diplomatic family. He studied at Antioch University (OH), then did postgraduate studies at Wits University (University of Witwatersrand) while playing horn with the SABC Symphony Orchestra. He played in the Durban Symphony Orchestra, then studied politics and psychology at the University of the Free State.

Sean was honored with the Punto Award at the 2006 International Horn Workshop in recognition of his leadership in South Africa. An important aspect of the symposium was sponsorship of instruments for SAHS and Navy Outreach programs and a tour for symposium attendees to visit students participating in the outreach programs.