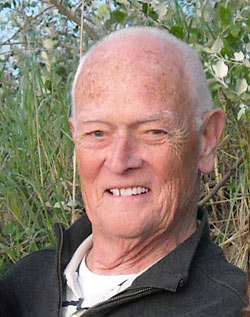 Most horn players are familiar with the Fripperies, Quipperies, Tripperies, etc. of Lowell ("Spike") Shaw. Spike has made these and other arrangements and compositions available through his publishing company, The Hornists' Nest, and Spike can be found at an exhibit table at most international symposiums and many regional workshops.

Spike was born in 1930 in Joliet IL. Both his parents were amateur performers who believed in the value of musical training. His father brought a horn home when Spike was in the sixth grade, a rental from Lyon and Healy in Chicago. Spike had been studying piano for several years with little enthusiasm. After a few months, his grade school teacher sent him to a trombonist, Jaroslav Cimera, with whom Spike studied until his senior year in high school, when he studied with Max Pottag. When Spike was a high school sophomore, he played second horn to Jim Winter in the Oak Park-River Forest Symphony when Jim was working on an advanced degree at Northwestern University. That association sparked Spike's interest in making horn his career.

Spike earned a bachelor's degree from Northwestern University in 1951, continuing his studies with Max Pottag, who stressed musical playing in their large horn ensembles. A smaller group met on its own. Some arrangements for that group are now in the Hornists' Nest catalog. After graduation, Spike played in the US Air Force Band at Sampson AFB near Geneva NY for four years. The members were encouraged to arrange music for the many groups within the organization; "it became a four-year lab course in playing and writing," remembers Spike. Occasionally the dance bands were short a trombone, and Spike filled in, learning how to play the uneven eights that are the basis of the Fripperies.

Spike went back to Northwestern for a master's degree. Philip Farkas was then the horn teacher, and he guided Spike in changing his embouchure. In 1956, Spike started auditioning and won the position of second horn in the Buffalo Philharmonic, where he stayed until 1994. He started teaching at the University of Buffalo in 1957 and founded The Hornists' Nest in 1964.

Asked about the origins of the Fripperies, Spike explains, "The first Frippery was written as an exercise for my horn students at the University of Buffalo. For several years I was the band director at UB as well as the horn instructor. There was interest among the band students in forming a dance band, and, as there weren't too many charts available at that time, I began writing arrangements for the group. As long as I was going to be at the rehearsals anyway, I added a horn part to the standard big band instrumentation so I could play along. The horn students were eager to have the chance to participate, and we were soon using a horn section of four players. Rather than let them embarrass themselves the way I had when I first had the chance to play that style music, it seemed best to give them some small exposure to particularly the eighth-note patterns that are so different from what we had experienced in the Kopprasch books. My aim was to give them some idea where those pesky final off-the-beat eights fall within the uneven swing notation."

The name "frippery" came about because "I was looking for something to suggest the frivolous, fun, light-hearted nature of the music. The word 'fripperies' came to mind, and it was several years later when I finally looked up the real meaning of the word. Something about a cheap, showy bauble of little intrinsic worth was the nicest of the definitions. Somehow, it stuck."

Spike organized his university students into a horn choir as he was convinced, from his experience with Pottag, that the ensemble was a good teaching tool. Area professionals and high school students joined, forming the Buffalo Horn Club, which played some of the LA Horn Club arrangements as well as original compositions. A member who was moving away suggested that, instead of copying the arrangements just once for his future use, they start a publishing venture in 1964. "Four of us put up $100 each, talked to a lawyer, ran off some copies of HN 1, 2, and 3, and then mailed a copy of the Five Bach Trios to all the horn players we could think of. The business gradually grew from there. … Two of the original investors left the area and one took a break from the horn, so I was left doing most of the chores. Gradually it became clear that it was really a one-man operation and I bought the others out. What started out as a spare time activity now keeps me quite occupied in my retirement."

In addition to the Fripperies, the first of which were written in the 1960s and which now number 40, Spike has written 19 Bipperies, 4 Tripperies, 8 Quipperies, and 13 Just Desserts for solo horn with optional string bass parts – and counting.

Spike has arranged many other works for horn choir. "The name Bach seems to show up quite frequently in our catalog. There is rarely a dull line in a Bach composition. Each voice is always heading somewhere."

Spike says, “I feel fortunate that I discovered an unfilled niche and had the background and experience to take advantage of it. I still enjoy playing in horn ensembles, attending workshops, and keeping in touch with the many friends I have made through music.”

Spike received the Punto award at the 1990 symposium at Eastern Illinois University and was award Honorary Membership at the 2010 symposium in Brisbane, Australia. An interview with him appears in the February 2000 issue of The Horn Call.