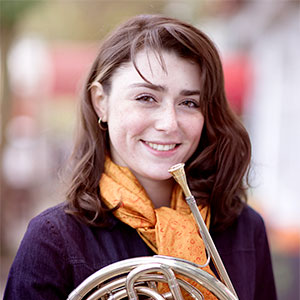 Emma Brown is currently a horn performance major at Michigan State University, studying under Professor Corbin Wagner. She has also studied with such notable performers and educators as Dr. Caroline Steiger, Dr. Denise Root-Pierce, and Janine Gaboury. While in high school, she participated in many district, state, and national honors ensembles, including the Michigan Youth Arts Festival and the NAfME’s All National Honors Band. Since she began her time at Michigan State, Emma has participated in the Symphony Orchestra, Symphony Band, and the Honors Brass Program. She has also competed in and won several solo competitions over her years of playing. She is passionate about teaching others about the power of music, and is incredibly excited and honored to bring her ideas and creativity to the IHS Student Advisory Council. Her other interests include painting, drawing, and learning Spanish. 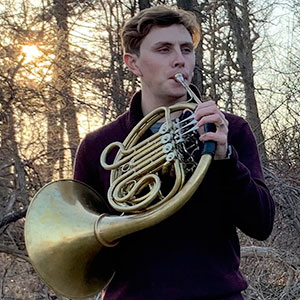 John Degnan (Jupiter, Florida) is a Junior studying with Leslie Norton at the Blair School of Music at Vanderbilt University. He is a Cornelius Vanderbilt Scholar pursuing a degree in Horn with a second major in Political Science.

He is an active member of the Vanderbilt Orchestra and Vanderbilt Wind Symphony. In addition, John serves as a substitute horn for the Nashville Sinfonietta, and is a passionate chamber musician with The West End Brass Quintet. This past semester, John was selected as a finalist for the Vanderbilt Concerto Competition.

This summer, he will be attending the Brevard Institute, and in past summers has been a fellow of the National Music Festival and participated in Invested Musician’s Summer MasterCourse. He is proud to be a member of the Student Advisory Council for the International Horn Society. In his free time, John enjoys good coffee, biking, and spending time outdoors. 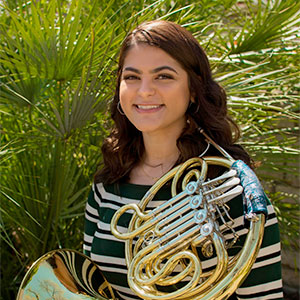 Sarah has also played in various region groups and performed at the TCU Horn Fest multiple times. She has worked as an Intern for a beginner band program in Mansfield ISD while studying under her previous private lesson teacher; Josh Davis.

Sarah has plans to become a middle school band director while also teaching private lessons. Some of Sarah’s other interests include drawing, fashion, and fitness. 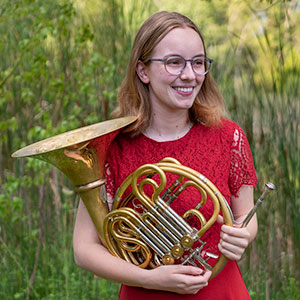 Dana Reckard, Cedarburg, Wisconsin, is a junior studying with Richard Seraphinoff and Dale Clevenger at the Indiana University Jacobs School of Music. She is pursuing a degree in horn performance with a minor in French.

Dana has performed with nearly every Jacobs ensemble. Collegiate performance highlights include Britten’s War Requiem, Handel’s Giulio Cesare, Bernstein’s Mass, Nielsen’s 4th Symphony, and the Nutcracker. She is an active member of the natural horn studio. Dana has also studied jazz horn with Wayne Wallace, and she has performed with the Jacobs Latin Jazz Ensemble.

Dana currently serves as the Community Chair for Andrew and Rupal Bain’s Invested Musician program, creating marketing materials and engaging with their virtual musician audience. During quarantine, Dana performed with the Miami Music Virtual Festival. In summer 2019, Dana studied with Jacques Deleplancque and his horn studio at the Conservatoire Nationale Supérieur de Paris. She also completed an advanced language immersion seminar while in France. This summer, Dana will attend the Berlin Opera Academy’s Saluzzo program in northern Italy.

In addition to classwork, Dana serves as a Jacobs student ambassador and has worked as a Jacobs assistant orchestral manager. Recent horn instructors include Josh Phillips and Dietrich Hamman. Aside from music, Dana enjoys quilting, collecting refrigerator magnets, and biking. 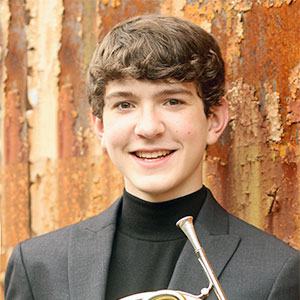 Inman Hebert is currently a sophomore at Prattville High School in Alabama studying under Dr. Brenda Luchsinger of Alabama State University. In addition to playing in the Prattville High School Wind Symphony and the Pride of Prattville Marching Band, Inman also plays in the Montgomery Youth Symphony. He has performed with the Alabama Horns and two virtual ensembles, placed third in the Montgomery Artistic Competition for Exceptional Students, and is in the top Alabama All State Band and Alabama All State Orchestra. 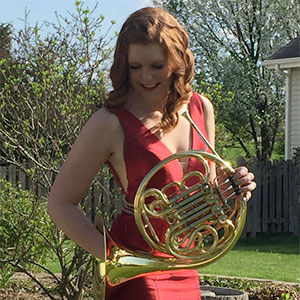 Lauren Antoniolli studies horn at Western Illinois University with Dr. Jena Gardner. She is thrilled to serve the International Horn Society on the Student Advisory Committee this year.

Outside of horn interests, Lauren volunteers as a licensed Emergency Medical Responder and Crisis Text Line Crisis Counselor. She is affiliated with the Beta Omicron Chapter of Mu Phi Epsilon. Lauren serves as a School of Music Ambassador at Western Illinois University, mentoring underclassmen students and assisting with recruitment and retention efforts. In her spare time, she enjoys being outside, spending time with family and friends, reading, and dance. 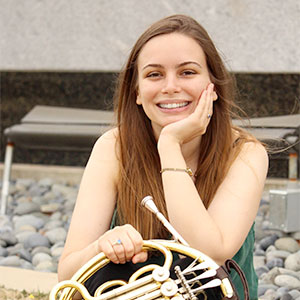 Kiersten Gustafson is a recent graduate of the University of North Texas, where she studied horn with Dr. Stacie Mickens and Dr. William Scharnberg. Memorable undergraduate performances include the 2019 UNT Symphony Orchestra Gala, where she played principal horn on a demanding program of Bruce Broughton's film score music, and the 2019 George Papich Chamber Music Studies Competition, where she placed as a finalist with her brass quintet (coached by Caleb Hudson of Canadian Brass). She particularly enjoyed playing in the pit for UNT's production of Janáček's The Cunning Little Vixen, and hopes to seek out more opera-playing opportunities soon.

Besides performing, Kiersten also teaches a small studio of high school students and is a member of the International Women's Brass Conference and Mu Phi Epsilon. During the summers, she enjoys mixing horn playing with outdoor adventures at festivals such as Brevard Music Center, Sewanee Summer Music Festival, and Pacific Region International Summer Music Academy. When COVID-19 shut down summer 2020, she participated in and helped promote the online masterclass series Cor Camp by Horns United.

This fall, Kiersten will begin master’s study at the Royal Academy of Music in London. Inspired by a love of literature and old things, Kiersten also holds a Medieval and Renaissance Studies Certificate from UNT. Her dream is to be hired at a Renaissance faire to ride around on horseback blasting hunting horn.